During manufacturing, storage and delivery processes, therapeutic proteins encounter several surfaces and materials, such as metals, glasses, oils, and polymers. These can range from stainless-steel production vessels to glass prefilled syringe delivery devices. The inherent surface-active nature of proteins can cause them to interact with surfaces, leading to possible denaturation and subsequent aggregation. This aggregation can produce safety related issues like unwanted immune responses, undesired cross-reactivity, or loss of efficacy. 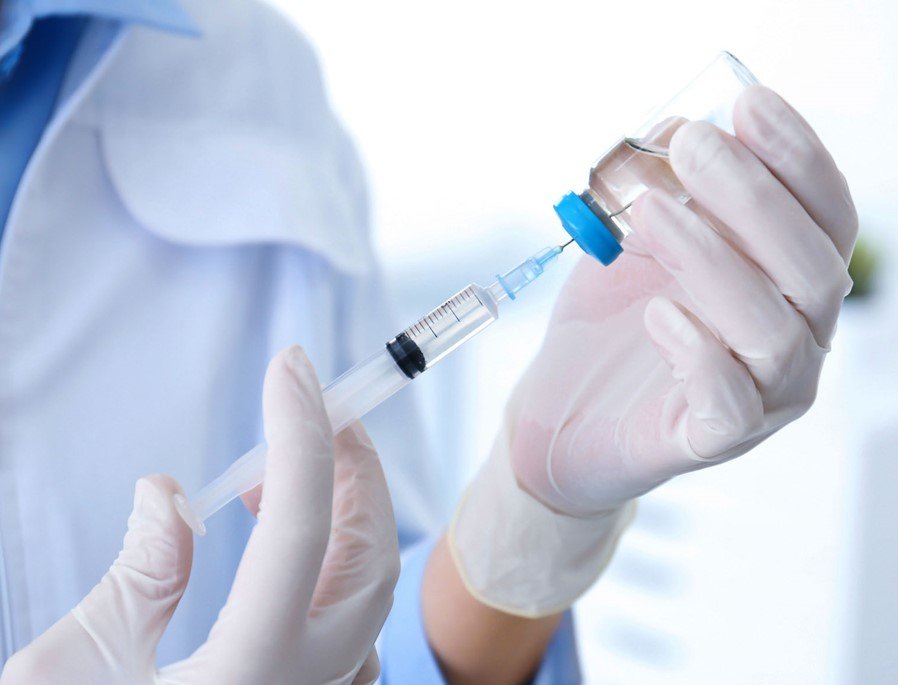 Excipients are additives to a protein formulation that help to stabilize the protein’s structure and minimize any potential unwanted aggregation cascade. They can range from simple buffers to more complex components such as amino acids, sugars, surfactants, and antioxidants. Surfactants, or surface active agents, play a major role in determining how a protein will interact with a surface through three possible mechanisms (Fig 1): 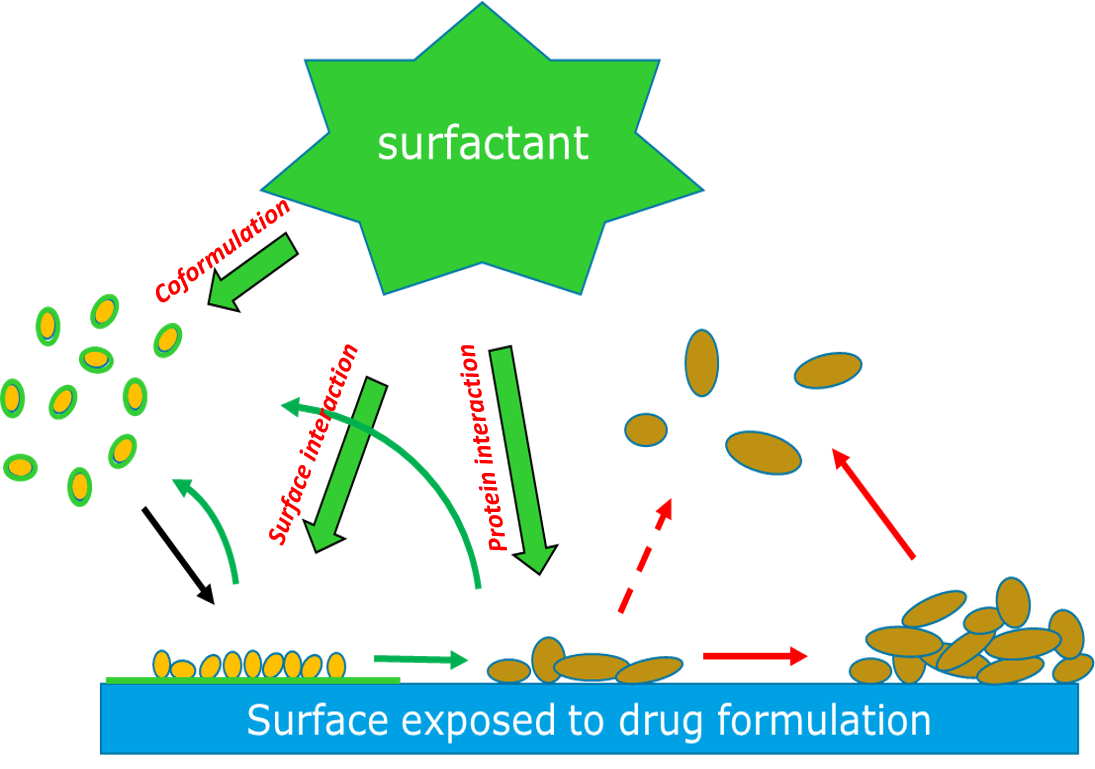 The surface sensitive QSense Quartz Crystal Microbalance with Dissipation (QCM-D) technique can be used to evaluate how proteins interact with manufacturing vessels, processing materials (such as filters), storage containers, or delivery devices. QCM-D is a sensor-based surface technology that monitors nano-scale changes at surfaces in real time.

Since multiple different surface materials can be prepared on the QCM-D sensor this opens up the potential to easily study a wide range of different materials. This technique can quantify both the amount of protein that interacts with a surface, as well as the resulting structural (viscoelastic) property changes from the interaction between the protein solution and the QCM-D sensor. The presence or lack of excipients, and other formulation conditions such as concentration, pH, or type of buffer can be evaluated to determine what effect they have on the adsorption characteristics. Stresses such as temperature fluctuations, pH changes, or agitation can readily be probed.

Note: Custom sensor surfaces can be made upon request.

In this case study, a model protein, lysozyme, was adsorbed on polyvinylidene fluoride (PVDF), polystyrene, polytetrafluoroethylene (PTFE), and stainless steel in the presence and absence of polysorbate 20 (PS20), a commonly used excipient in drug formulation. PVDF is commonly used as a filter material for protein solutions. Polystyrene was chosen to mimic diagnostic instruments and disposable laboratory ware, Petri dishes, tissue culture components, flasks, and pipettes. PTFE was chosen since it provides excellent chemical and thermal resistance, and is currently being used in a variety of applications, including filters, valves, fittings, seals, gaskets, tanks, containers, and tubing. Stainless steel was chosen to represent production vessels.

Lysozyme at 10 mg/ml (1%) was prepared in PBS buffer. PS20 was used at 0.05% (V/V) concentration. Solutions were pumped into the QSense Analyzer using a peristaltic pump at a flow rate of 100 µl/min.

The following 4 sets of experiments were performed on each type of surface with the descriptor defined in parentheses:

The presence of PS20, either in solution or pre-adsorbed onto the surface, significantly reduced protein adsorption on PVDF and polystyrene surfaces (Fig 2a and 2b). Conversely, no significant effect of PS20 was observed on PTFE and stainless-steel surfaces (Fig 2c-2d).

The protective effect of surfactant, when it was mixed into drug formulation (coformulation) was similar to the pre-adsorbed surfactant layer onto the surface (surface interaction). The post treatment of the adsorbed protein layer by PS20 (protein interaction) did not result in appreciable protein removal. 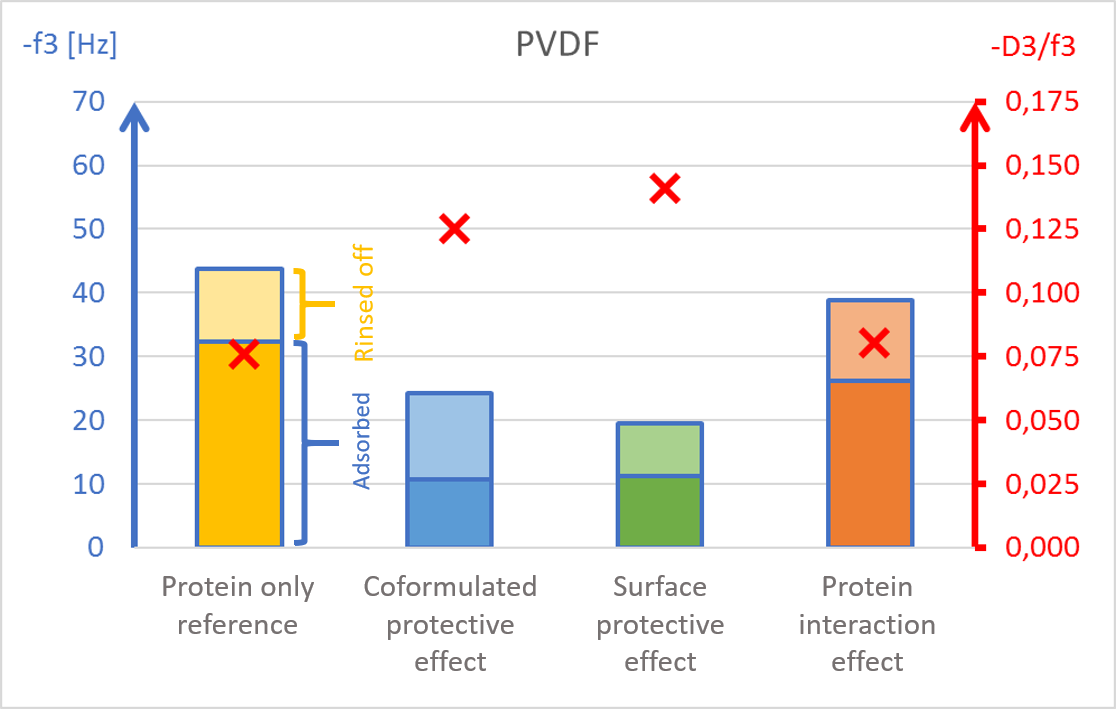 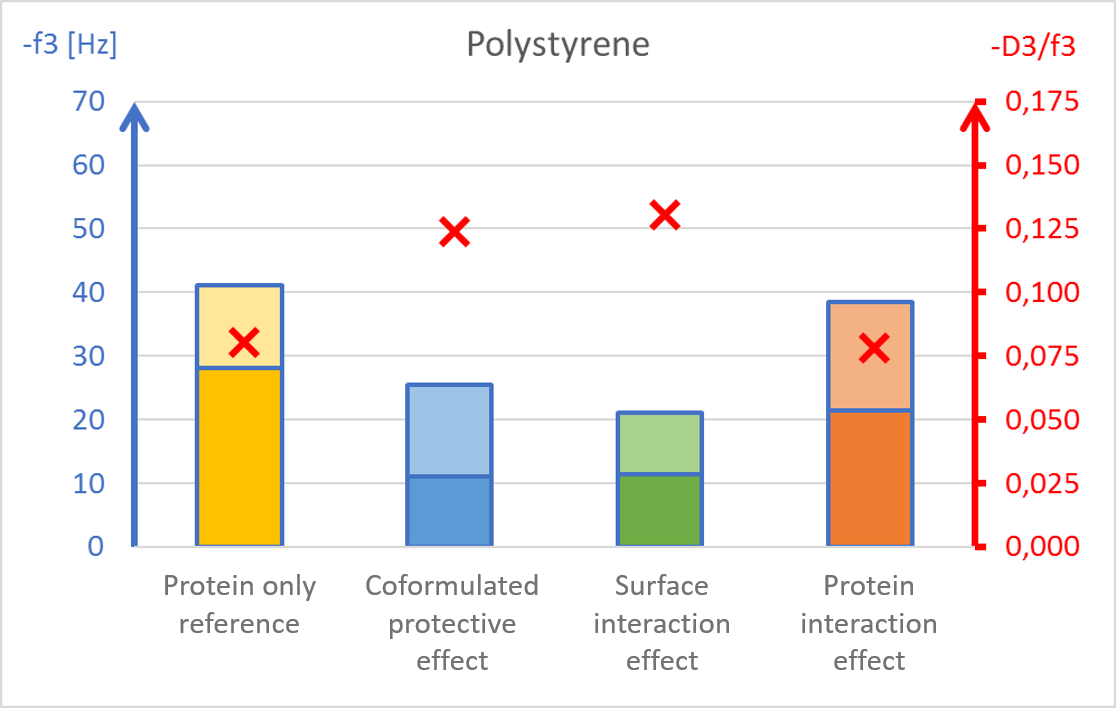 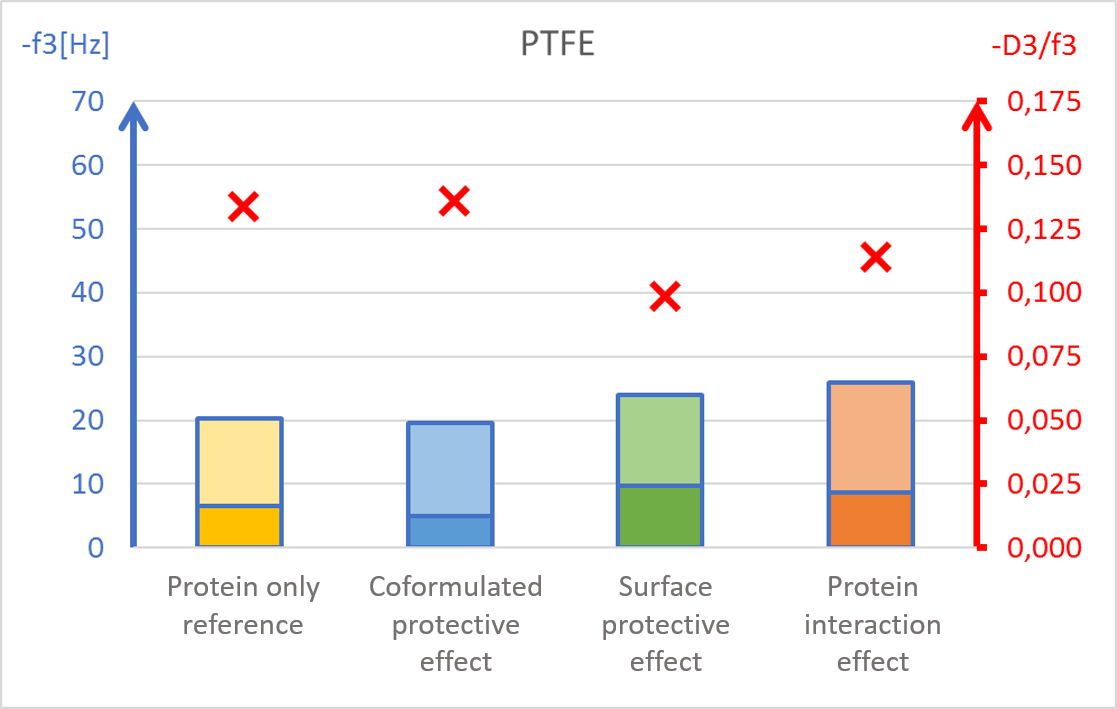 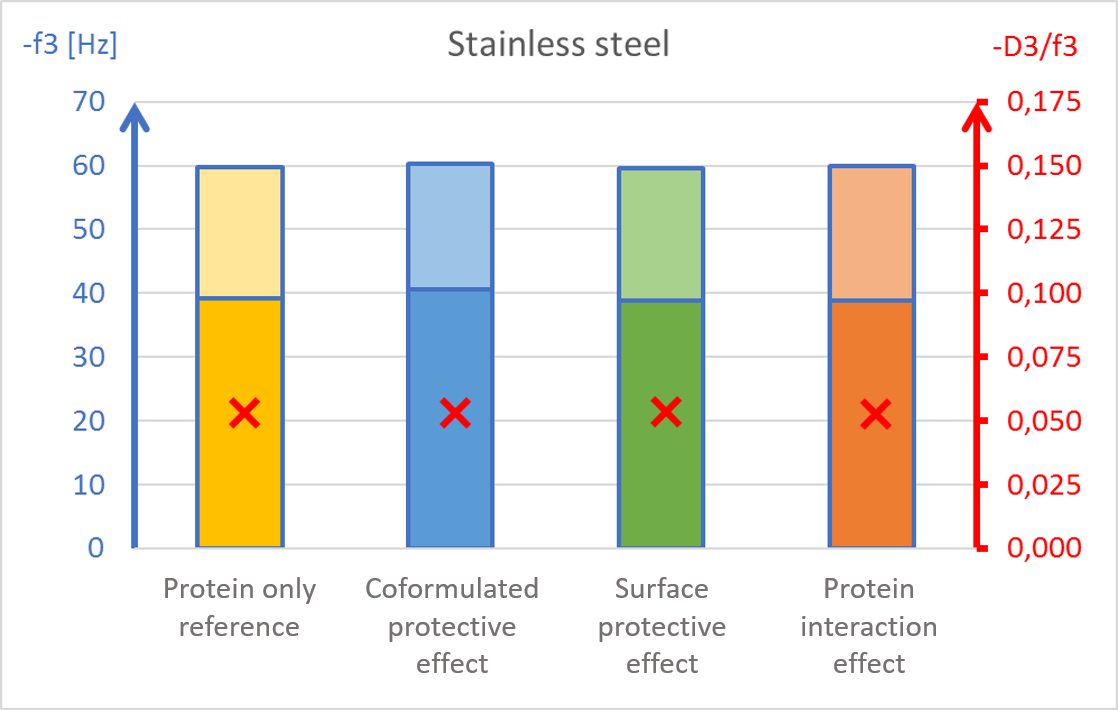 It was found that polysorbate 20’s effect and mechanism of protein protection depended on the surface material in question. This example showed how surfactants can protect proteins from interacting with surfaces by forming a protective barrier between the protein and material surfaces. This data may also indicate protein denaturation when adsorbing onto particular surfaces such as stainless steel and potential risk of aggregation upon further surface interaction.

Use of the QCM-D technology has been reported in many publications. Here we list the top five publications and highlight what they studied.

Li et al. applied QCM-D to enhance the understanding of surfactant-protein stabilization mechanisms in relation to various material surfaces. Surfactants such as polysorbate 80 (PS 80) were added to formulations to act as a stabilizer in order to protect the protein from any adverse surface-induced effects.

Oom et al. used QCM-D to study the adsorption behavior of two monoclonal antibodies, mAb1 and mAb2, with significant differences in hydrophobicity and self-oligomerization. The surface uptake of the two molecules was characterized as a function of surface material, presence/absence of surfactant and concentration.

Wiseman et al. utilized QCM-D to fundamentally understand the orientation of a mAb adsorbing to a hydrophobic solid surface.

Li et al. described the use of QSense QCM-D in characterizing four types of typical surfaces used in the development of biologics: polycarbonate, polyethersulfone, borosilicate glass, and cellulose to explore the interactions of surfactants of Pluronics/Poloxamers (PEO-PPO-PEO copolymers).

The reader is referred to several other relevant articles for further reading: