There has been a global shift from fossil fuels to renewable energy to protect civilization from the worst effects of climate change. Special focus has been given to solar and wind energy. However, utilizing electricity from solar and wind in a grid becomes challenging due to their intermittent nature. The supply of sunlight or wind is not constant; thus, it cannot meet the constant demand for electricity. Energy storage, via batteries for example, is required for continuous energy supply as well as for ensuring stability of the grid by responding quickly when unexpected increases in demand occur.

Energy can be harnessed in many forms such as potential, kinetic, chemical, electromagnetic, and thermal. There are currently three commonly used energy storage devices: batteries, fuel cells and supercapacitors. Batteries convert chemical energy into electricity via electrochemical processes. Fuel cells use chemical energy from available fuels, such as hydrogen, natural gases, propane, or diesel. Supercapacitors store electrical energy in static charge between electrodes.

When looking from a global perspective, Bloomberg New Energy Finance (BNEF) has recently forecasted that global deployment of both grid-scale batteries and behind the wheel batteries will significantly increase over coming decades. The market is expected to double six times between 2016 and 2030. Further, the cost of electricity generated by these devices has significantly fallen since 2018 due to ongoing research in this field; for example, the cost for lithium-ion batteries has fallen 35%, and offshore wind based electricity has tumbled by 24%.[1]

Processes at the Electrode Surfaces are Critical!

Analysis of energy storage devices, and their optimization for better efficiency and cost require an understanding of the different processes that occur inside the device. Almost all critical processes of batteries, fuel cells or supercapacitors occur at the electrode surface. Further, the surfaces of construction materials or packaging is also important; the materials need to be corrosion resistant for longer device life. Corrosion is also a surface phenomenon. Therefore, characterization of surface materials and surface reactions are crucial for optimization of the performance, life cycle and efficiency of batteries.

Quartz crystal microbalance with dissipation (QCM-D) is a highly sensitive surface technique that monitors real time changes occurring at surfaces with nano-level sensitivity. QCM-D can be combined with electrochemistry to monitor electrochemical processes at electrode surfaces.

Lithium (Li)-ion batteries are the most popular type of rechargeable battery for consumer electronics. Due to their high energy density, low maintenance and light weight compared to other batteries, Li-ion batteries have found a wide range of applications from mobile phones to cars, as well as medical equipment, drones, and power tools.

Li-ion batteries come in different types, but they are generally made up of the following components: a cathode that is the source of lithium ions, an anode that stores and releases ions through an external unit, an electrolyte that serves as a medium that transports ions between the cathode and anode, and a separator that act as a barrier that prevents the cathode and anode from coming in contact with each other. 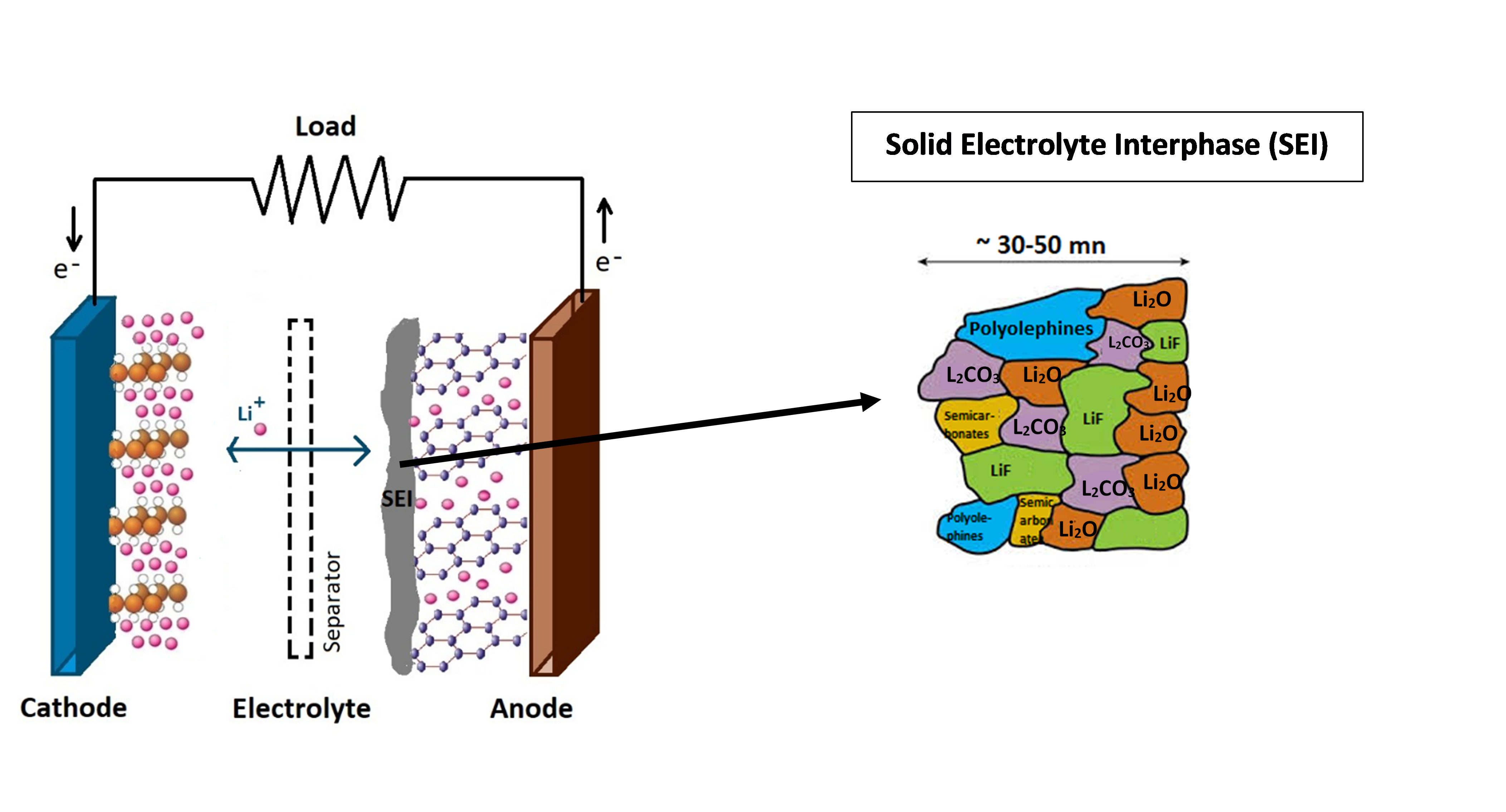 An important phenomenon that occurs in Li-ion batteries is the formation of a passivation layer known as solid electrolyte interphase (SEI) at the electrode surface (Figure 1). SEI is formed during the first few charging cycles and plays an important role in defining battery performance. It inhibits further decomposition of electrolyte and maintains the reversible lithiation chemistry, resulting in long battery life. Understanding the chemistry, structure, and the process through which SEI is formed is essential for optimizing the Li-ion battery efficiency.

The common techniques that are currently used, such as Fourier-transform infrared spectroscopy (FTIR), X-ray photoelectron spectroscopy (XPS), Mass spectroscopy, Atomic force microscopy (AFM), Scanning electron microscopy (SEM) and Transmission electron microscopy (TEM) are difficult to combine with the in situ EC cell for real-time monitoring. The ex situ analysis, on the other hand, can be time-consuming and requires great care in sample preparation because SEIs are highly sensitive to contamination, air, humidity, etc. Since EQCM-D can provide real-time characterization of the formation of SEI as well as its structural changes because of different stimuli such as applied current, voltage, temperature, and additives, this technique is ideal for such in situ experiments.

In this case study EQCM-D was used to observe the SEI formation on both titanium dioxide and carbon electrodes under different voltage cycles.[2] Carbon films were coated on copper-coated gold sensors by DC magnetron sputtering, TiO2 films were prepared by reactive sputtering, lithium salt solution in polycarbonate was used as electrolyte, and lithium foil was used as a counter electrode. The set-up was assembled in a glovebox. The CV’s were performed at a constant rate of 10 mV/s over four increasingly reducing voltage windows all having 3.4 V vs Li/Li+ as the highest potential and with 1.5, 1.0, 0.5, and 0.0 V as the lowest potential. The raw QCM-D and electrochemical data obtained during CV cycles are shown in Figure 2. 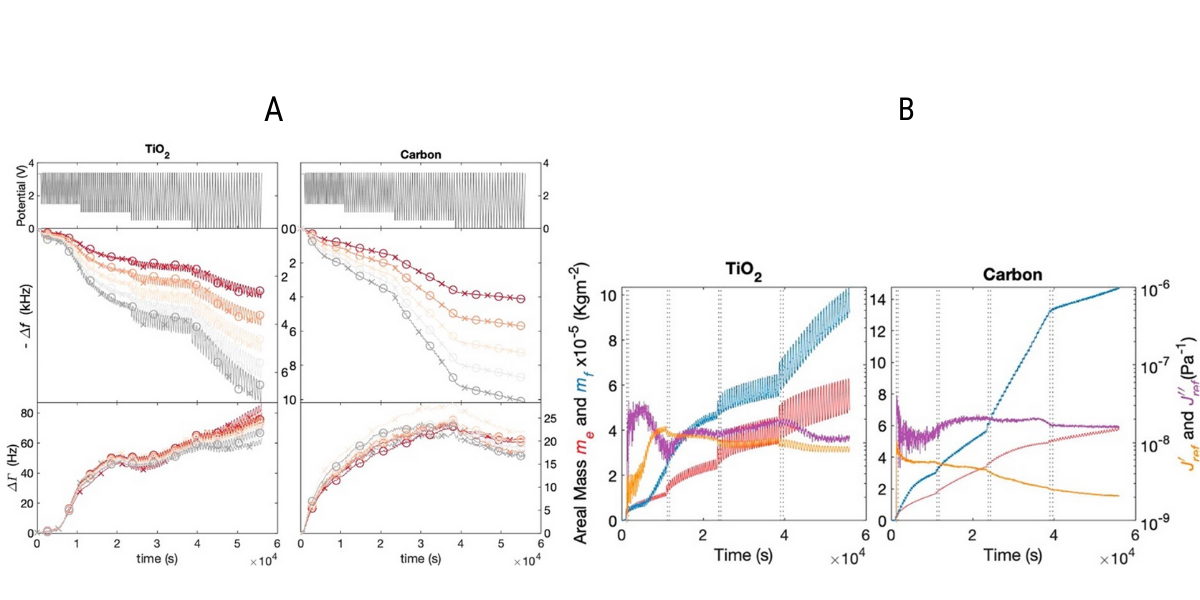 Both electrodes exhibited progressive decrease in frequency and increase in half bandwidth as shown in Figure 2A. These results indicated a continuous growth of a viscoelastic SEI on both electrodes with one exception on the carbon electrode in the zero voltage window where the SEI growth slowed down and the layer stiffened (as suggested by a decrease in half bandwidth). This result could be attributed to almost complete passivation of the carbon electrode in this voltage range.

Another interesting observation was that TiO2 showed an oscillation in frequency and half bandwidth in phase with each voltage cycle, whereas carbon electrodes were smooth (Figure 2A). These results indicated that on TiO2, mass changes per cycle were dominated by reversible Li intercalation, whereas, this may not have been the case on carbon.

Data was further modeled to extract areal mass, elastic and viscous compliances noted as J’ and J” (Figure 2B). The calculated mass mf was compared with theoretically predicted Li mass, me, i.e. mass related to Li insertion and extraction only. The difference between the me and mf signals implied the (co)occurrence of process(es) that differ from Li intercalation. For both materials, mf and me increased irreversibly with time (Figure 2B). The irreversible mass increases, along with differences between the me and mf, indicated the formation of a solid−electrolyte interphase. The changes in compliances were diminished at more reducing voltages, showing the SEI films in this voltage range were stiffer.

EQCM-D was employed to characterize porous electrodes during multiple charging/discharging cycles in this case study.[3] The porous structure of electrodes is beneficial to improving the transmission rate of lithium ions into an electrode, however in the process of charging and discharging, repeated ion insertion and desertion affect the porous structure. The hole size and mechanical properties of the electrode can be compromised, resulting in loss of battery performance.

Multiple frequency measurement was used to characterize the porous electrode surface structure by a new method called in situ hydrodynamic spectroscopy.[3] The hydrodynamic spectrum is based on the variable penetration depth of different harmonics of the QCM-D sensor. Data at the fundamental frequency ~5 MHz and 6 odd harmonics i.e. up to 65 MHz can be measured using QSense QCM-D.

The equation that relates penetration depth to oscillation frequency, and the density and dynamic viscosity of the liquid is shown here:

The harmonic penetration depth can be used to probe the state of liquid close to the surface and inside the porous electrode, which in turn provides information about the porous structures themselves. This unique feature was able to distinguish between liquid trapped in small holes versus larger holes (Figure 3).

Coatings of binder-free porous LiMn2O4 electrodes were prepared on quartz sensors by a spray-pyrolysis method. Various samples with different geometries, thicknesses and surface coverages were prepared to explore the fluid dynamics as a function of roughness.

Figure 4B represents ΔW/n and Δf/n as a function of penetration depth for LiMn2O4 coatings in 0.1M Li2SO4 electrolyte solution at open circuit potential. The solid straight line relates to the responses of a rigid ideal flat surface. The data for coated surfaces deviated from this straight line, and deviation was higher for higher electrode masses. The data was fitted to a model (the dashed lines are the best fitted results), and structural parameters for the porous layer and non-porous aggregates were extracted. This included parameters such as the average thickness of the hydrodynamic porous boundary layer, h, its permeability length, δ (linked to porosity), the fraction of sensor surface coverage by the electrode, q, and the average radius of semi-spherical non-porous aggregates, r. 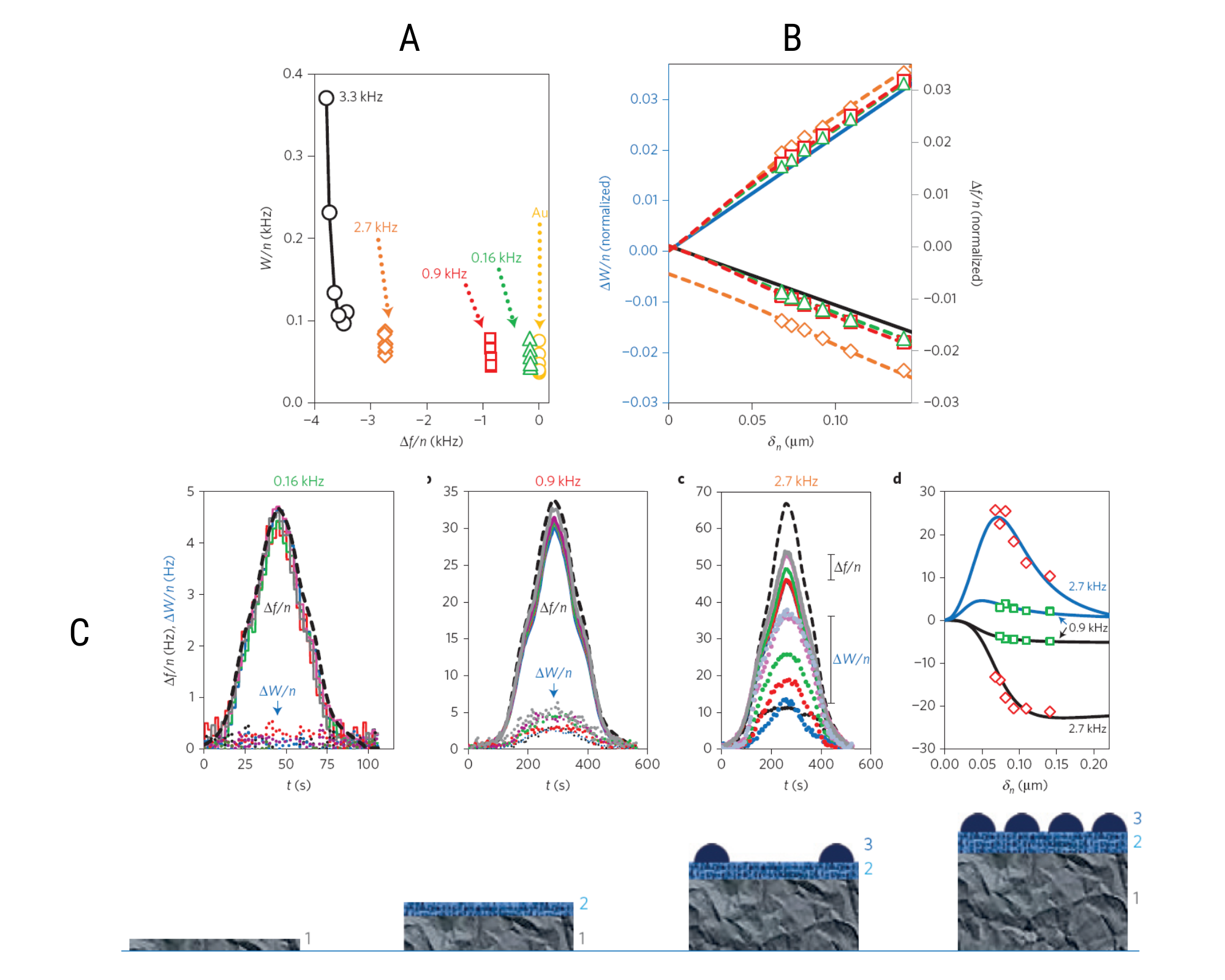 In figure 4C, the first three plots show raw EQCM-D data: ΔW/n and Δf/n vs. time, during charging and discharging scans for the related electrodes. For the thinnest electrode at 0.16 kHz all frequency plots overlapped, whereas, for thicker electrodes the values vary with overtone numbers. The peak in plot 4C(d) was used to characterize the changes in porous structure during charging and discharging cycle. This peak reflects hydrodynamic interactions within a porous electrode layer when penetration depth matches the permeability length, implying an intense liquid movement inside the electrode’s pores.

QCM-D in combination with electrochemistry can be used as an effective tool to characterize the surface changes of electrodes in energy storage devices in situ and in real time. By synchronizing QCM-D studies with electrochemistry measurements, growth, and properties of SEI in Li-ion Batteries under various electrochemical conditions can be monitored. Additionally, the multiharmonic measurement capability of QCM-D enables in situ characterization of porous /rough electrodes.