Electrospraying is a voltage-driven process governed by the electrohydrodynamic phenomena where particles are made from a polymer solution. The particle diameter generated with this technique typically ranges between tens of nanometers to a few micrometers (ex. 50 nm to 50 µm). The most basic setup for this technique involves a solution contained in a reservoir (typically a syringe) and tipped with a blunt needle (for needle-based electrospraying), a pump, a high voltage power source and a collector.

Once the Taylor cone is formed, the charged liquid jet is ejected towards the collector. Collectors can be, but are not limited to, stationary flat plates, rotating drums, and reservoirs with a liquid like water.

Depending on the solution viscosity and solvent characteristics, nano- or microparticles will be formed as the jet breaks into smaller drops due to coulomb repulsion forces and solvent evaporation. These particles can then be handled post-processing to fulfill application needs like drug delivery and encapsulation.

The spraying process starts when the solution is pumped at a constant flow rate and a specific voltage is applied to create an electric field between the needle tip and the collector. Charges accumulate at the liquid surface. When the electrostatic repulsion is higher than the surface tension, the liquid meniscus is deformed into a conically shaped structure known as the Taylor cone.

In order to obtain reproducible electrosprayed particles, the polymeric or non-polymeric solution to be processed needs to be reproducible by itself. Otherwise, non-consistent results will be obtained independently of maintaining all electrospraying parameters the same between batches. Some of the key parameters to maintain batch-to-batch consistency for electrosprayed nano- and micro-particles development are viscosity, conductivity, surface tension, which are affected by polymer, solvent, and additive selection. Other factors like solid content are measured to maintain solution reproducibility, and solvent selection to manipulate particle morphology or to fulfill application needs. Finally, the solution should be well mixed and homogeneous before it is processed.

Viscosity is one of the key properties in electrospraying that is influenced by the molecular weight of the polymer, along with solution concentration and solvent selection. In theory, higher molecular weight and/or higher solution concentration translates to higher viscosity. Solvents that have more interaction with the polymer structure also tends to result in a solution with higher viscosity.

During the electrospraying process, and with a low viscous solution, polymer chain entanglements occur during the jet formation, resulting in a particle structure being formed during electrospraying. If the solution does not have sufficient polymer entanglements to generate particles during the process, dripping will be generated and no particles will be formed. Meanwhile, if the solution has a high viscosity, fibers will be typically formed through a technique known electrospinning.

Solvent and polymer content can affect the overall solution conductivity. Solutions with higher conductivity tend to generate small particles. The solvent quality and additives will also affect the conductivity of the overall solutions. This is one reason why using the same solvent grade should be maintained to allow for solution reproducibility. For example, some solvents contain additives or stabilizers that will then affect solution conductivity, and eventually its sprayability. Inorganic and organic salts, along with surfactants, can be used to selectively manipulate the solution conductivity. When increasing the overall charge density of the solution, the jet formed during the electrospraying process can be optimized to promote particles with a narrower diameter distribution.

A solvent able to dissolve the polymer(s) and additive(s) while maintaining a homogeneous solution is always desired. Ideally, the solvent in the polymer solution should completely evaporate during the electrospraying process. Otherwise, generated particles could be wet making the particles to fuse together and agglomerate. A scientist must keep in mind some of the solvent properties to avoid such non-desired defects. These include boiling point, dielectric constant, and vapor pressure. Using a solvent that has a low boiling point could allow for it to be completely evaporated. Meanwhile, if it evaporates too fast, the polymer will clog the needle, disrupting the electrospraying process. To avoid this, a solvent with a lower vapor pressure can be selected. Particle diameter and surface morphology will also be affected by boiling point and vapor pressure. In general, lower boiling point solvents tend to form high particle diameter with a rough surface. The opposite relation applies for vapor pressure and dielectric constant. As a quick example, polycaprolactone (PCL) particles have been able to be generated in the nanoscale when high boiling point and high conductivity solvents , like acetic acid, and microscale PCL particles formed with low boiling point solvents like dichloromethane (DCM) or methyl acetate.

Solid content is also measured to confirm a solution has been prepared properly. For this, moisture analyzers are usually employed. As a rule of thumb, higher solution concentration (or solid content) translates to larger particle diameter.

In order to start the electrospraying process, a voltage needs to be applied to the needle for charges to accumulate and overcome the surface tension. A positive voltage is commonly applied; meanwhile, negative voltage could also be employed to start the process. Higher positive voltage in the needle typically improves the stretching and the electric field, causing smaller particle diameter to be formed. Some studies have seen the opposite, or no effect on particle diameter, as it is dependent on the system to be processed.

Although the collector is typically grounded to collect electrosprayed particles, researchers are frequently using an opposite charge to the needle in the collector (opposite charges attract each other). A negative voltage is key to improve sample deposition, decrease sample deposition width, properly collect all generated particles, and prevent them from going throughout the spraying chamber due to charge repulsion. 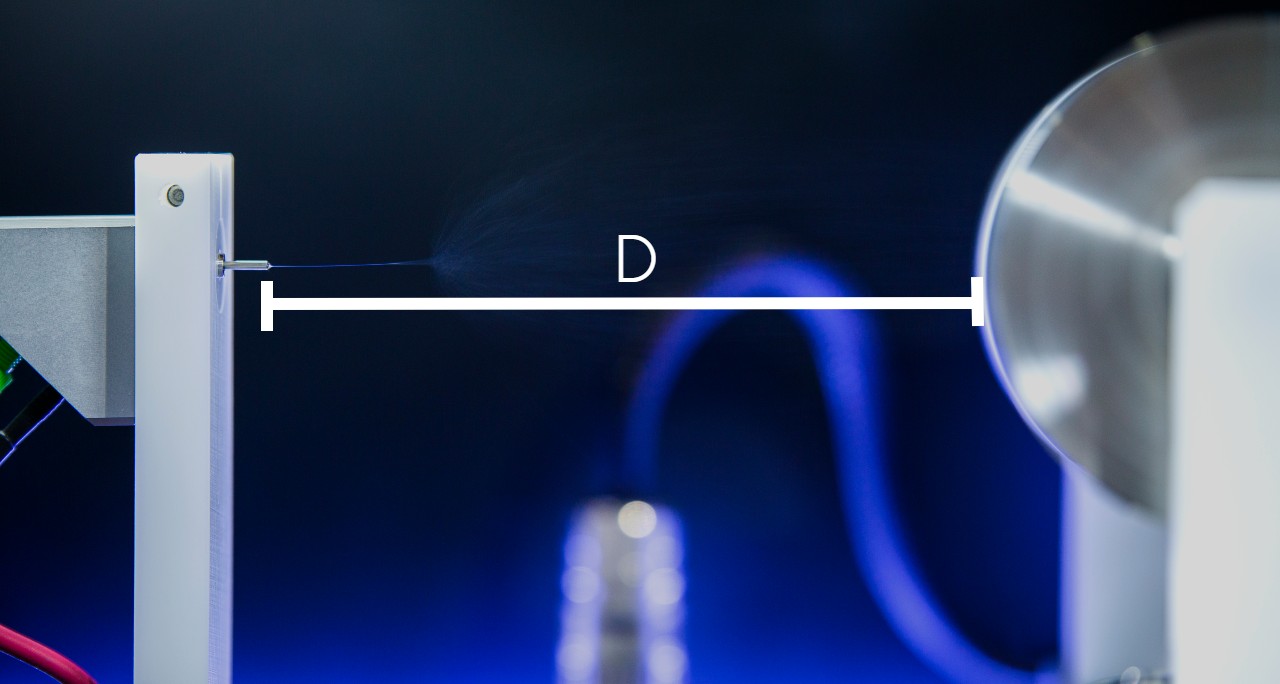 Needle-to-collector distance is the second key factor affecting electric field during electrospraying process. To obtain dry and narrow particle diameter electrosprayed particles, needle-to-collector distance needs to be properly selected for the solvent to completely evaporate and coulomb forces to properly act as the particles are traveling from the needle to the collector.

Finding an ideal flow rate able to maintain a stable Taylor cone is ideal and is known to be solution dependent. Increasing solution flow rate during the electrospraying process commonly results in larger final particle diameter. If generating a sample with a syringe pump, it is always ideal to know your syringe material (ex. plastic, Teflon, and glass), type (BD plastic, Hamilton, among others), and its diameter (ex. syringe plunger displacement will affect the volume dispensed).

Electrosprayed particles can be collected in different types of collectors to fulfill application needs. Drum collectors at low rotating speeds are commonly used to collect particles. Using low rotating speeds allow to improve particle distribution throughout the drum surface and minimize possible agglomeration. Flat plate collectors are also used, where the particles are then scraped and collected post-electrospraying. Using a liquid reservoir (ex. water) is also another common collector. Mixing this liquid in the collector during the electrospraying process will allow to prevent particle agglomeration. The surface tension of the reservoir liquid can be adjusted to further prevent this behavior.

Monitoring processing temperature and relative humidity (RH) is key for electrospraying reproducibility. Solvent evaporation rate and solution viscosity is influenced by temperature. At high temperatures the viscosity will decrease, allowing the user to obtain smaller particles as the stretching of the jet is increased and the solvent can be evaporated easier. Relative humidity influences the solvent evaporation rate, which will have an impact on particle microstructure and continuous sprayability. For example, if using a low boiling point solvent in solution and electrospraying at low RH may cause needle clogging. This is not ideal as the Taylor cone will not be maintained over time, causing the process to not be continuous. Meanwhile, if a high RH is used water droplets can accumulate in the surface of the particle which will lead to particles with a porous microstructure. The ideal goal is to optimize the environmental conditions to allow for a stable Taylor cone where no needle-clogging occurs over time, the solvent is successfully evaporated during the process and non-desired defects are encountered in the sample.

In order to improve solvent evaporation, air flow can be introduced in the electrospraying chamber at a desired speed. This parameter, in combination with a slightly negative pressure in the chamber, is more frequently used these days in the field to properly remove evaporated solvents during sample processing. Typical air flows used are 50 to 180 m3/h while constantly maintaining temperature and relative humidity over the minute.

Blunt needles are typically used for needle-based electrospraying. Needle gauges commonly used are 20 to 26 Ga (inside diameter of 1.600 to 0.260 mm; note that by going up in needle gauge, the inside diameter decreases), and with a needle length of 0.5 to 2 inches. Selecting a proper inside needle diameter is key to prevent needle-clogging due to solvent evaporation. As a rule of thumb, low needle gauges (ex. 20 Ga) are better for solutions with higher viscosity, and high needle gauge (ex. 26 Ga) are better for solution with lower viscosity.