Plunge freezing has been the gold standard for cryoEM single particle sample prep several decades now [1]. For better and for worse, it did the job. It’s been the method that cryoEM users have relied on to create the samples which have been used in thousands of groundbreaking publications around the world. Although they have their limitations, plunge freezing and blotting have left an unforgettable mark on this research. However, we’re excited to move the state of the art forward as it relates to grid preparation. With more scientists eager to get 3D reconstructions of their proteins, automated grid preparation is the most efficient way to improve the effectiveness of the cryoEM workflow. Using the VitroJet time to structure will be decreased bringing more knowledge and breakthroughs while reducing the headaches experienced in sample preparation. We believe automation through jet vitrification will be the future of sample preparation in your lab and solving more structures in your lab.

It’s safe to say that improved grid preparation is much needed in the single particle analysis (SPA) workflow. In this article, we will discuss how ethane jetting is a key technology for enabling automation of grid preparation. Control and automation are a few of the innovations behind the VitroJet, a breakthrough solution for improving sample preparation in cryoEM.

Sample preparation is still an area where efficiency can be enhanced to lead to faster success in most labs. It remains sub-optimal and is sometimes associated with luck, the weather, or sometimes a touch of “black magic.” While a little unpredictability may be good to keep you on your toes in everyday life, it certainly won’t do when you’re loading grids in a microscope costing six to seven figures. The efficiency of the time spent on these powerful microscopes is critical. Grids often, inexplicably, come out good one run and unusable on the next, resulting a major nuisance for scientists hungry for structures.

At the moment, much of the grid preparation is done by hand and leaves room for error, at times, even among more experienced users. Additionally, many core-labs desire to expand their facilities to provide cryoEM access to local and external structural biology researchers. Many of these researchers won’t have the muscle memory when approaching manual grid preparation on the freezing devices that the facility managers and technicians have. The clipping steps in particular are delicate and need coordination. The experience can be daunting for first time or infrequent users and the time needed to gain the finesse of the technique can be costly to the research. Moreover, variability from grid to grid as well as from user to user can lead to confusion. It can be a barrier in optimization and achieving results. Sometimes it’s difficult to track the origin of the problem encountered when screening the sample in the microscope.

The Autogrid: The Key to Automation

The VitroJet is designed for control and reproducibility. The key here is automation, made possible through the use of the autogrid, pre-clipped at room temperature and ready to go. Rather than manipulating bare grids, known to be flimsy and bendable, the strong outer ring of the autogrid can be handled directly by a specially designed gripper. The gripper carries the grid through the entire cycle of grid preparation. The cycle begins with plasma cleaning, blotless sample deposition, ethane jet freezing and the transfer of the vitrified grid to a grid box without any manipulation by the user. In this manner, the conditions for preparing one grid are fully controlled and will remain the same for the subsequent grids. This bypasses potential user contamination or damage in handling and clipping seen in traditional preparation technologies. Reproducibility is maintained via a controlled environment. Autofill of the cryogen used, ie ethane, as well as the liquid nitrogen are also implemented. This prevents any environmental contamination that is often encountered with the opening and closing of the cryochamber as well as the surrounding environment. 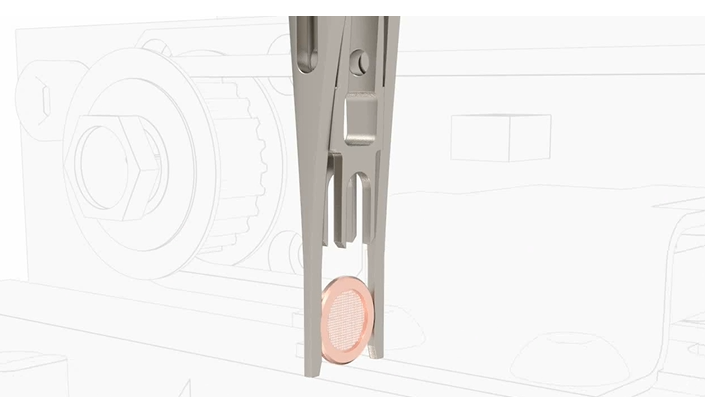 Why haven’t we automated grid preparation sooner? In plunge freezing, grids and autogrids create a bubble of evaporating cryogen when submerged into a bath, lowering their overall cooling rate. This bubble that’s created from the edge of the grid hitting the cryogen will decrease the contact area to the sample along the mesh of the grid. The cooling occurs by the outer ring inward toward the sample. The copper grid bars of the grid are actually cooled first, then the sample, leading to indirect vitrification of particles [2]. Despite this indirect cooling mechanism, samples are vitreously frozen on bare TEM grids. Unfortunately, this doesn’t translate to autogrids. The cooling rates reached when the heavy mass of the autogrid assembly is introduced will be insufficient to produce vitreous ice. This has proved to be the limitation plunge freezing with autogrids. Thus, we’ve had to settle for a manual setup with grids having to be clipped for the autoloader after the vitrification process. However, with the VitroJet, we found a way around this roadblock and made it a part of our solution.

Our team at Cryosol recently implemented the novel technique to freeze the sample on pre-clipped autogrids. Jet vitrification is an adapted approach to SPA which brings the cryogen directly to the sample with two simultaneous streams of liquid cryogen. Not only does this create consistently vitreous ice in single particle solutions, it actually freezes faster than plunge freezing (Ravelli et al., 2019). The bubble effect described in plunge freezing is bypassed by targeting the sample first. The sample is giving priority by being targeted by the cryogen, with the sample carrier following in the cooling process. Overall, higher cooling rates and automation of grid preparation have resulted in an overall win-win in reliability of the system.

You might be asking, how much cooler is jet vitrification and what are the limits? This is a topic we are exploring that could open the door up to freezing larger samples that aren’t constrained to a few hundred nanometers. Tomography is an area that still remains largely to be explored with its own freezing limitations. While the target for now is particles in an aqueous solution, don’t be surprised to see more on larger structures in the future!

How does automation benefit you?

Automation removes variability in manual handling. The scientist is given control over the relevant parameters leading to reproducibility. More importantly, through automation the feedback is clear on the changes implemented in sample optimization. This means when a biochemical change is made to better see the particle on the grid, you’ll see its effect. The effect of a parameter change can be understood without worrying that variables may have changed from one run to the next. So, automation actually leads to faster optimization of your grid preparation parameters and those long desired high-resolution structures.

In the VitroJet, we have combined a number of features which contribute to much needed reproducibility. Integrated plasma cleaning, blotless sample deposition with pin printing, and visual feedback on the sample deposition process are topics we will discuss in upcoming blogs. So stay tuned!