The Attension Theta Flex and the Pulsating Drop Module PD-200

Emulsions and foams play a key role in important products such as foods1, pharmaceuticals2, and oil recovery formulations3. The stability of these products plays a key role in their performance and shelf life. Amphiphilic molecules such as surfactants, proteins, and polymers are key components in these emulsions and foams. These molecules will preferentially adsorb to the air-liquid or liquid-liquid interface in a specific orientation to minimize their free energy. Over the course of their storage and consumption, these materials will flow over each other and change the size and shape of their interfaces constantly. The study of how these molecules respond to external deformations and stimuli is called interfacial rheology.

During dynamic processes, a droplet containing surface-active molecules will expand and contract. As the surface area of the droplet changes, the number of molecules adsorbed to the air-liquid or liquid-liquid interface also changes. The hydrophilic head of these amphiphilic molecules will orient towards water or polar liquids, and the hydrophobic tail will orient towards air or oil phases. The speed at which this happens is indicative of the stability of a foam or emulsion. For example, if surfactant molecules quickly reach the interface, this provides fewer opportunities for a droplet to merge with another nearby droplet and imparts additional stability.

One common example of this behavior in the phase separation of an emulsion is salad dressing, an emulsion of an oil phase and a water phase containing miscible materials like water, vinegar, salts, and spices. Polysaccharides are commonly used in these dressings to serve as emulsifiers and stabilizing agents to prevent phase separation4. One could compare the difference between a creamy Italian dressing, a traditional Italian dressing, and a basic combination of oil and vinegar to see how the addition of an emulsifier affects the droplet formation in each of these formulations. After shaking, the well-emulsified creamy Italian dressing would remain as a relatively uniform-looking material over several days, the traditional Italian dressing would show significant indications of separation over the course of minutes, and a non-emulsified mixture of oil and vinegar would separate almost immediately. 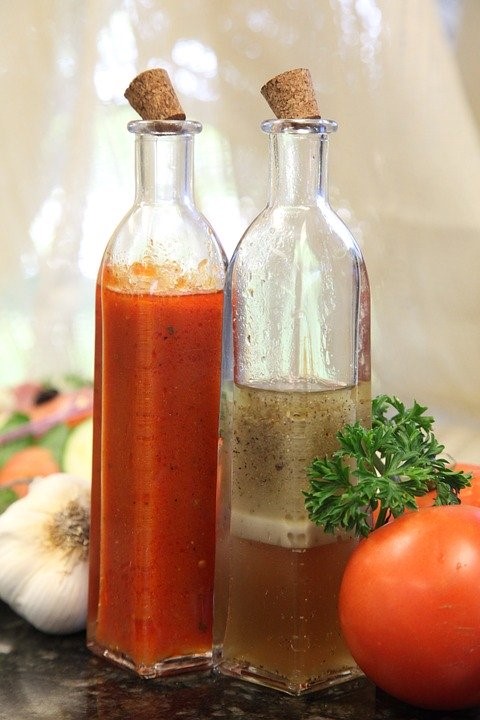 Dilatational interfacial rheology, where the interface is expanded and contracted in a controlled manner, is one method for measuring the stability of emulsions and foams. In this technique, an optical tensiometer is used to measure a pendant drop. The drop is then pulsed using a piezo-pump to change its volume at a certain frequency. Pendant drop measurements are commonly used to measure the surface tension of a liquid, and in this case the change in surface tension is measured as a function of its change in area. The difference between the driving force of the drop change and its actual response is also measured. The different parameters are described in the following three equations5: 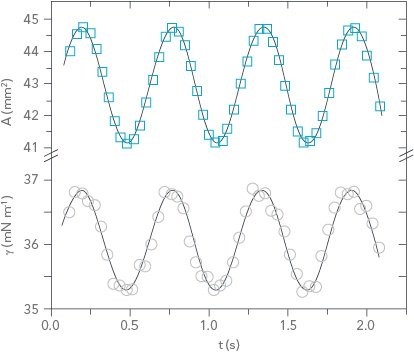 The PD-200 pulsating drop module is an accessory for the Theta Flex instrument that uses a piezo-pump to actuate drop volume. The user can designate the waveform, frequency, and amplitude of the drop. A pendant drop is formed, and then the piezo-pump uses the input parameters to oscillate the drop volume. Image recognition from the OneAttension software monitors the surface tension properties dynamically. Measurements can be automated to provide one-touch measurements at multiple frequencies. Once the experiment is completed, the variables in equations 1, 2, and 3 are calculated by simply choosing the data to analyze and a list of results is populated as seen in Figure 5. For a practical application of dilatational rheology in quality control, please see the study presented here: “How Interfacial Rheology Can Replace Inefficient Emulsion Characterization in Droplet-Based Microfluidics.” 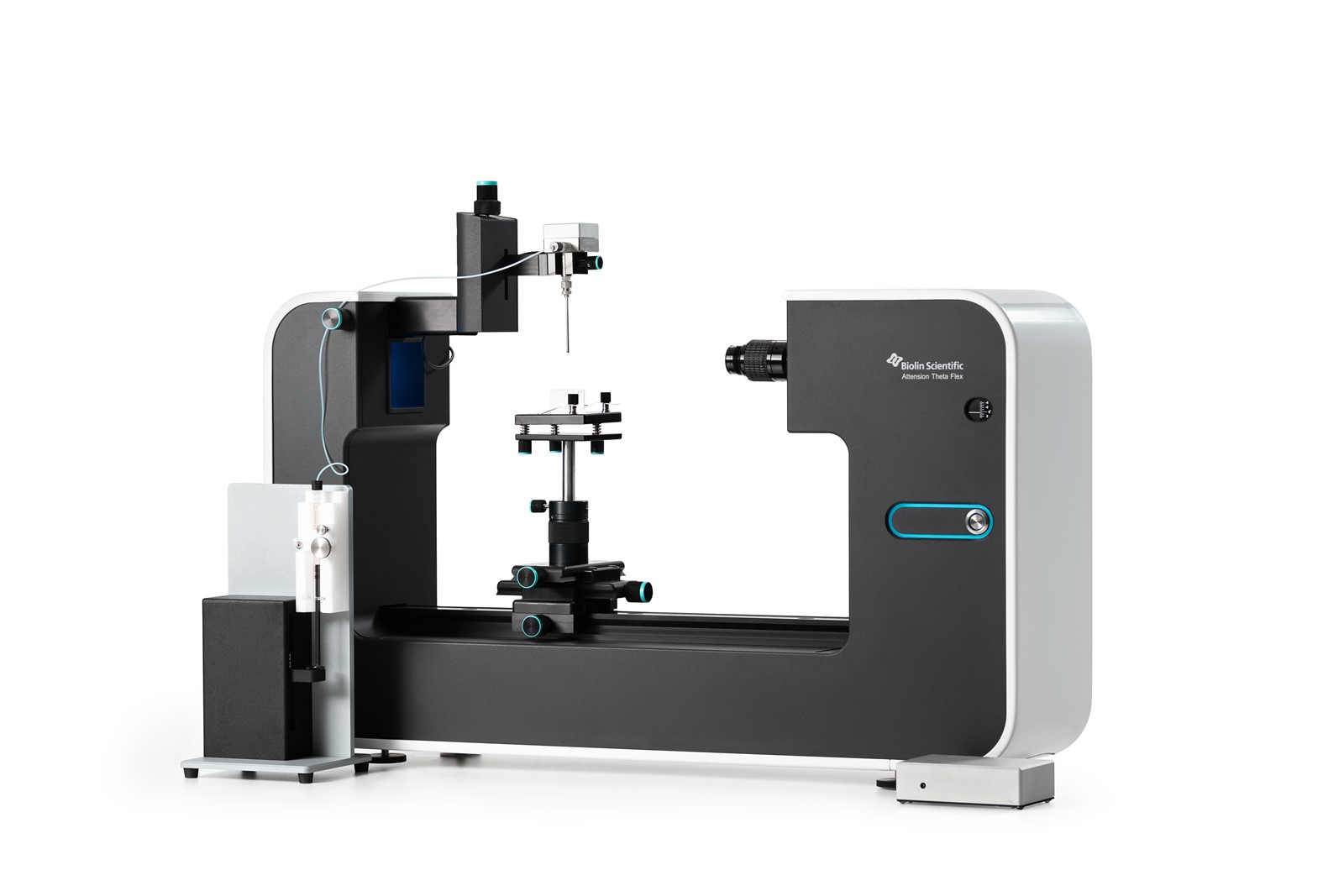 Figure 4: The Theta Flex system equipped with a PD-200 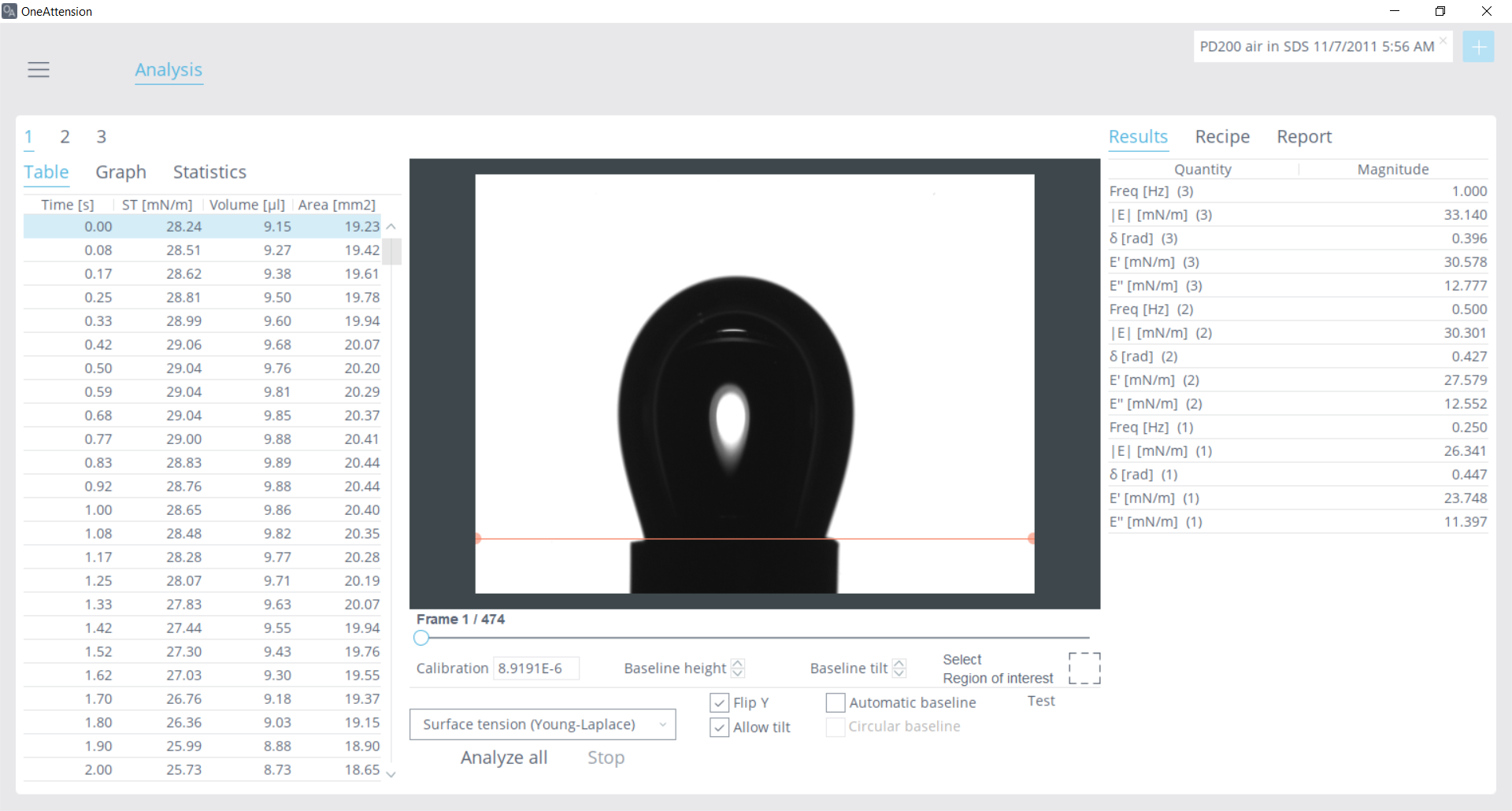