Langmuir-Blodgett (LB) deposition is a well-established method for generating monolayers of sample onto a substrate. A layer of molecules (or nanoparticles) are placed at the interface and compressed with barriers until they form a monolayer at the air-liquid interface, then a substrate is dipped through the monolayer, resulting in a well-formed monolayer on the substrate. One main drawback of this technique is its scalability. Individual substrates, up to 12” silicon wafers, can only be dipped one at a time, resulting in low throughput.

Instead of using individual substrates for deposition, the KSV NIMA Roll-to-Roll system utilizes a roller that holds a flexible sheet of substrate. Plastics such as poly(ethylene terephthalate) and poly(vinyl chloride) are common substrates. The sheet feeds through the air-liquid interface, and LB deposition occurs as the roll is pulled through the interface. The continuous feed-through allows for continuous deposition of an area much greater than an individual substrate, thereby greatly increasing throughput. The positioning of the barriers and rollers dictate whether the molecules are deposited in a two-sided LB configuration (Figure 1) or a one-sided Langmuir-Schaefer (Figure 2) configuration. 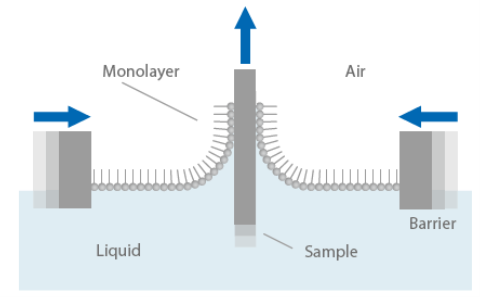 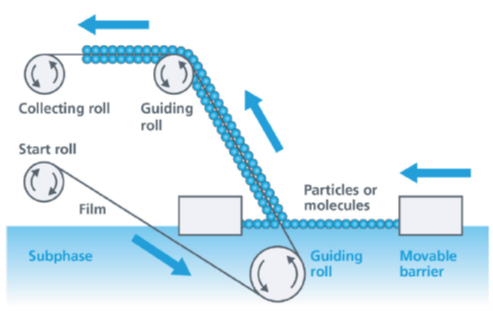 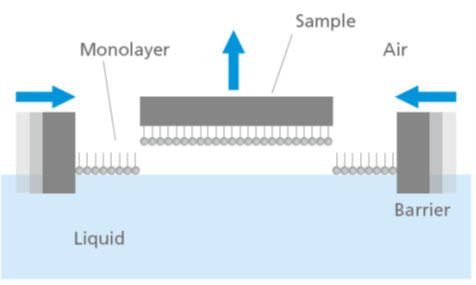 Some fields where deposition of a large area of single-layer molecules on a substrate can be beneficial include colloids [1], solar cells [2], and organic light-emitting diodes (OLEDs) [3]. The ability to control surface pressure of the molecules at the interface prior to deposition allows for the formation of high-quality films with few defects. Combined with the larger continuous substrate available for deposition, the roll-to-roll LB trough addresses a key limitation of LB technology by adding significant scale-up capabilities. For researchers looking to move their research into prototyping and feasibility phases, the roll-to-roll system is an indispensable addition to their lab.